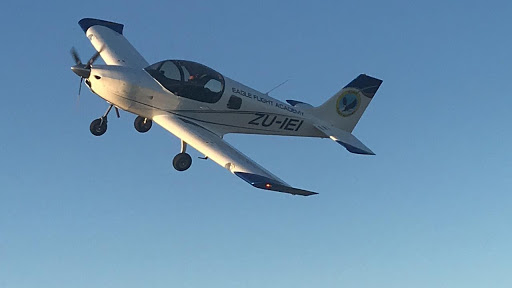 Are you interested in learning to fly? Eagle Flight Academy is a top SACAA flight academy in South Africa. We offer pilot training courses for both single and multi-engine aeroplanes and much more.

Private Pilot License – PPL (A) is a license that permits the holder to act as the pilot-in-command of an aircraft privately (not for remuneration). The requirements to obtain the license are determined by the International Civil Aviation Authority (ICAO), but the actual implementation varies widely from country to country. According to the ICAO, it is obtained by successfully completing a course with at least 40hrs (45hrs in South Africa) of flight time, passing eight written exams, completing an extensive solo cross country flight (minimum cumulative solo flight time is 15hrs), and successfully demonstrating flying skills to an examiner during a flight test or check ride (including an oral exam). The minimum age for a private pilot license is 17 years old.

Total of 45hrs flying time must include